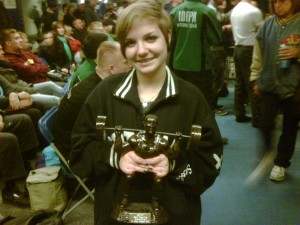 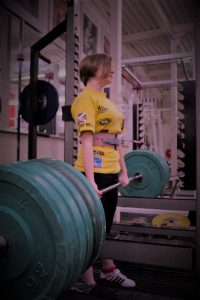 Picture the scene: The bright lights rain down with all the intensity of the scorching sun. A solitary figure stands, unmoving, encompassed by a shadowy flurry of people. The low dull, grumble of the distant crowd is halted by the piercing clank of gritty iron plates. A name is called. The figure stirs, stepping forward; waist fixed with leather, wrists bound. The lifter takes to the platform. For one eternal moment all is still, the world is gone. Suddenly fierce hands reach out and clamp around the coarse steel bar. All at once the weight is tortuously raised from the ground like a ship torn from its moorings in a storm. The bar grinds upward, agonisingly slowly, across bare flesh. The crowd cry out, screeching with vehement encouragement. Teeth clench as every vein is forced to the surface of the skin, the lifter growls with untamed fury. Then everything stops. Everyone stops: the lifter, the crowd, the judges. Everyone- like dust hanging in shafts of light. The lifter stands motionless. The bar raised to the exultant adoration of the crowd… “good lift.”

Now picture the figure: Imagine this Adonis. The curvature of every muscle defined beneath bronzed skin. Arms built to carry the world on his shoulders and legs like great pillars supporting the weight of his chiselled physique. Now what if I told you that ‘the lifter’ is actually a five-foot-nothing teenage girl? The very idea is ludicrous, preposterous, ridiculous. Impossible. Right?

I’m Hayley and I’m the only member of Team Rutherford who’s embodying the spirit of ‘Girl Power’. I took up lifting when I was fourteen shortly after my Dad’s return to powerlifting: I was with him in the gym one day when he was training and asked if I could try lifting and to utter disbelief I was actually pretty alright so I decided to keep it up. Feeling inspired by my shining example Ryan later did what all little siblings do and blatantly copied me; and thus Team Rutherford was born.

So here I find myself- a little girl in a big man’s world.

….Or so it would seem, the truth is in fact that there are no boundaries in powerlifting and no such thing as ‘your typical powerlifter’ because once you look past the stereotypes and the expectations you begin to realise that it doesn’t matter whether you’re young or old, a woman or a man; when you get down to it its just you against the bar:

So you better just shut up and lift!

Hayley took up the sport in 2010 aged 14 and weighing only 42kgs. This 5ft pocket powerhouse has went on to break multiple world records spanning Three weight classes.

2010 in which year she became Scottish Junior Champion and set 2 Scottish Records. Subsequently she has been: